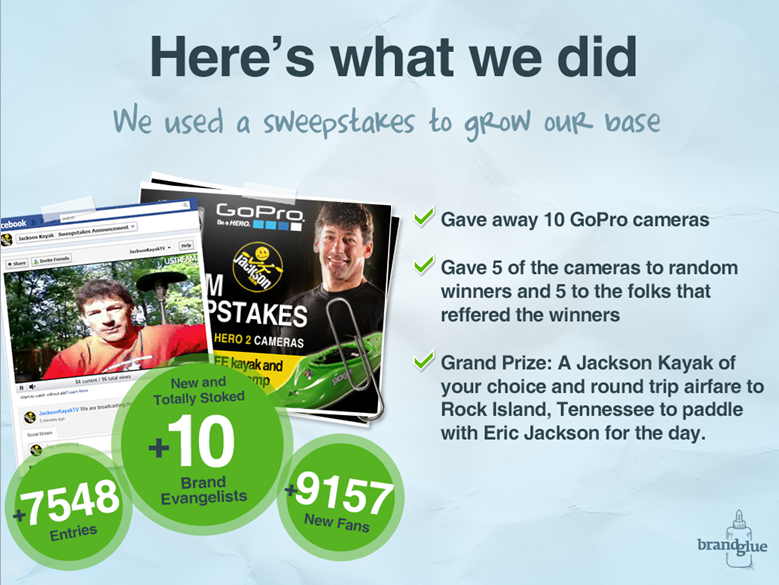 Getting your posts seen by your fans should be a top priority.

But in order for your fans to see what you post on Facebook, they must first interact with your posts if you have any hope of getting a bottom-line return on investment from Facebook.

Facebook has a news feed algorithm (often referred to as EdgeRank) that hides a significant portion of your updates from your fans, even when you’re getting good interaction. Most pages aren’t reaching a very high percentage of fans.

PageLever’s seminal research on this topic revealed that the average page only reaches 7% of its fans daily.

When some marketers see this, their knee-jerk reaction is to use ads to acquire more new fans. But if you already have a decent fan base, it makes more sense to firstfocus on reaching your fans before you shift your focus to growing your audience.

In this article I’m going to share with you the tips learned by examining a recent social media success story.

BrandGlue‘s client Jackson Kayak was only reaching 20.1% of their fans in January 2012, but they were able to increase that to 39.8% within 3 months. They accomplished this by using the same tips shared in this article.

Before you begin to work on extending the reach of your posts on Facebook, you need to know how well you’re doing at reaching your fan base. Remember, if you’re not getting the results you want from your Facebook fans, it could simply be a visibility problem.

So, how do you find out what percentage of your Facebook page’s fans you’re reaching? Go to your Facebook Insights and average your reach for the last 30 days, then divide that number by your fan count.

Of course, if you’re using Sponsored Stories to reach people outside your fan base, this won’t work. Your reach may be higher than your fan count. Facebook has claimed that Facebook pages reach 16-17% of their fans on average. And typically, the more fans you have, the lower the percentage you’ll reach.

Not happy about your current reach? To increase visibility, you simply need to increase engagement. The rest of these tips cover how to do that.

Of all the types of content you can share, photos give the best results. Photos are most engaged with and reach the most people.

My research using InfiniGraph shows that in almost every industry, photos have more interaction than statuses, links or videos. Photos often get from 5 to 20 times as much interaction as any other type of Facebook post. Here’s a simple example from Jackson Kayak’s Facebook page. On a Friday, instead of just typing in “Woohoo! It’s the weekend,” they posted a picture of two excited dogs with those words written onto the photo. That way, Facebook treats it like a photo instead of a status, and they got 125 likes, 25 shares, and 3 comments. That’s certainly much better than the results they were getting posting only text status updates (only 10 likes from this!):

Another application of always using a photo is the captioning exercise we’ll show in the next tip.

So use photos! If you don’t, you’ll miss out on up to 98% of the fans you could have reached with a photo. You’re posting to be seen, so get the most visibility you can.

Tip: When you share links on Facebook, make sure that if you put a link into a Facebook post first and it automatically shows a preview of the link, close that preview and add a photo before posting.

If you really want to post text, you can use text to caption a picture.

Here are three ways to generate images for your Facebook posts:

Every time you post, you have an opportunity to create curiosity, challenge people and inspire them. These are great techniques to increase interaction.

Try one of these four kinds of posts to generate engagement:

Jackson Kayak is fortunate that they and their fans produce a lot of great photos. They use these to create caption contests, and sometimes the other kinds of posts above. Think about how you can source a lot more photos. And if you don’t have an easy way, consider using other people’s Creative Commons licensed photos and giving them attribution.

Here’s an example of how I captioned a photo with an inspirational quote. First I looked at what was popular on Pinterest, and found a cool photo that had been repinned many times. It was a bridge.

So I Googled “bridge quotes” and found the building bridges quote by Isaac Newton. It was a perfect fit. I then captioned the photo in PowerPoint with the quote and posted it. It was shared 101 times. Important: If you’re going to repurpose other people’s images, assuming you can find the creator of the image, make sure you know what copyrights apply to the image, and give credit to the photographer or illustrator.

As mentioned in tip #2, photos will get you a lot more visibility and interaction.

The four kinds of posts in this tip help drive fan response even higher. That means you’ll get more shares and visibility, you’ll be fresh in your fans’ minds and they’ll be more excited about your brand.

These are critical accomplishments for driving and sustaining revenue from Facebook. Do all of these, and you’ve overcome some of the most pervasive Facebook marketing obstacles.

Jackson Kayak fans were asked to upload their awesome kayak photos, and they let the fans select the winner. The winning photo became their fan page cover photo for the month. You can do this too.

Ask users to upload their photos in a specific category. They are consciously (or subconsciously) participating in an ego contest. Often on Facebook it seems like we succeed most when we take advantage of the momentum of our fans’ self-interest. Once BrandGlue posted the finalists for the Jackson Kayak cover photo, folks would scramble to rack up likes by sharing and tagging.

Tagging people sends a direct notification to them, and their curiosity takes them back to the Facebook page. In order to interact with the photo they are tagged in, they have to like the fan page. This tagging, driven by the contest, creates more interaction and builds the fan base.

How do you make the contest happen?

BrandGlue used ShortStack. You may be tempted to do it by hand through page posts, but be careful! It’s actually against Facebook’s Page Guidelines to run any contest without using an app. You could lose your page.

#5: Build Fans Virally and Drive Revenue With Sweepstakes and Coupons

Sweepstakes can build fans more affordably than ads, they’re engaging and they’re fun. Lots of pages do them. Ad-based fan growth campaigns average $1.07, according to WebTrends, and even when they outperform the average, in my experience they tend to cost from $0.10 to $0.30.

A sweepstake can perform equally or better and builds more excitement and goodwill with fans than a mere Facebook ad campaign.

When using sweepstakes to cultivate engagement, remember that they’re only beneficial if you attract the right kind of fan.

For example, iPads are awesome, but everyone wants an iPad. Does wanting an iPad make someone a good customer for your brand? If not, beware of getting large numbers of fans who’ll never buy from you.

Sweepstakes build excitement and grow fans. They foster the kind of passion that fuels Facebook fan responsiveness, which in turn ensures you get great visibility and excited potential customers.

The revenue from a sweepstake can be great compared to the cost of the prizes, so if you haven’t ever run one, give it a try.

Coupons are another way to build fan growth and interaction. You canincentivize fans to share them with their friends, and require people to like your page before they can get the coupon.

Jackson Kayak didn’t use coupons, so let’s look at examples from a few other companies.

Here are some examples of success with coupons and viral sharing:

Interested in using coupons to promote your business on Facebook? You can use companies like Extole and Viral Impressions mentioned in the examples above, as they specialize in viral fan growth and sharing incentivization. Or you can use a tab-building service like Lujure or ShortStack to duct-tape your own together.

There are many places that companies can run into obstacles with Facebook marketing, not the least of which is the actual sales stage.

Note that many of your fans may be perfect potential customers for your company, but they may not be ready to buy yet. How do you accelerate their readiness to buy?

First, build their excitement with the other tips in this article, then offer a limited-time coupon that makes it seem like now is the best time to buy. That’s how you precipitate sales.

We’ve covered a lot of ground in this article. As you can see, there are many ways to do Facebook marketing and a bunch of companies that provide useful tools to help you succeed. It certainly can seem overwhelming, but just remember: the best way to eat an elephant is a bite at a time.

Try one or two new tactics each week. Eventually, you’ll master them all and have your own proven Facebook system that produces good profits for your company.

Who's on Facebook? The short answer, of course, is everyone. And that's why every company…

Among Facebook audiences worldwide, engagement with brands, via likes, comments, and shares, is surging in…