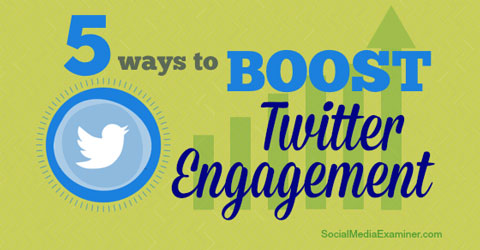 Are you looking for tips to get your numbers back up?

A few simple tweaks can get you more attention and interaction on Twitter.

In this article you’ll discover five ways to improve your tweets and up your engagement.

The most important thing you can do on Twitter is optimize your bio.

Even if people never read a single tweet, they’ll see your bio. And when they do, they’ll make a snap decision about whether to follow you.To put your best foot forward,include your occupation (e.g., Internet marketer or consultant), the types of updates you share (e.g., social media stats or killer marketing tips) and even hobbies (but perhaps avoid the all-time overused bio description “coffee lover”!).

A guy like Jeff Bullas, for example, knows the importance of a bio and has optimized his completely.

Your bio should clearly tell people what you do and why they should follow you.

His profile is top-loaded with the most important terms for his niche and abilities (like “Social Media Marketing” and “Strategist & Speaker”). He sprinkles in some bragging—mentions in Forbes and the Huffington Post—to establish his credibility. Perfect.

If you want people in your niche to find and follow you, include the right keywords and all of the right details.

People respond to people. In order to invite feedback and deepen engagement, it’s essential to be a real person—relaxed and approachable. One of the worst things you can do on Twitter (or any social network) is to be a boring automaton. If you insist on sharing dry, boring updates, you can’t expect to gain traffic.

For example, what do you think of this Twitter update? “EComm Industry Int’l Inc. predicts 250% increase in monthly revenue due to new product rollout. Read the entire industry report.”

Really engaging stuff, right? Actually, it could be. It just needs a little more spin: “Whoa! We just released the #Zinger product, and I was blown away by the uptick in revenue. Check out the stats!”

Another sure way to increase engagement is to be funny. Don’t be shy about adding some levity to social media—humor can shatter corporate stiffness.

Take a new tack and focus on funny.

The recent #AppleLive hashtag sparked conversation and got a lot of attention. To stand out a bit, HubSpot gathered the funniest tweets about the event and shared them. Since people love to be entertained, HubSpot knew it was very likely they’d get a boost in interaction.

Of course, don’t forget pictures. Visual content is the way to go on social—viewers and fans react to images faster than they do to text. If you can catch their eye with a picture that clearly conveys the main point of your content, they’re more likely to pay attention to your update. Go visual, and you’ll get more traffic.

There’s nothing wrong with asking people to complete an action. Dan Zarrella did a little survey and discovered that if you type “Please Retweet” in a tweet, you’re likely toreceive 51% more retweets (as opposed to only 12% when you don’t ask)!

Even big brands understand the power of asking for a retweet.

Your goal is to get more engagement for your tweets, right? Sometimes you just have to ask, and many times people are happy to oblige.

#4: Harness the Power of Hashtags

Hashtags let you interact with the most viral and current topics at any given time.

Many users follow specific hashtags to keep up with the topics that interest them. Including those hashtags in your own updates (as long as they’re relevant) is an easy way to join the conversation and catch the attention of your audience.

Hashtags can double your Twitter engagement rate, increase your number of followers and improve your reputation.

All that from a little # symbol in front of a word or phrase? Absolutely. Hashtags are a source of incredible power on Twitter.

The surest way to keep engagement flowing is to tweet regularly. When someone checks your Twitter profile, they can tell how active you are and when you last posted just by looking at timestamps.

An irregular schedule (or worse, not posting at all) is a great way to kill your Twitter interaction. If you don’t have signs of life, there’s no sense in following you.

As TechCrunch put it, “The more you tweet, the more followers you get, provided you actually have something interesting to say.”

During my test, I deliberately did not follow any new people. I simply became more active, and that’s all it took for people to start following me.

A past study from Sysomos revealed that the top 5% of Twitter users post every day. The most active Twitter users had more than 2,000 followers, compared with less than 100 followers for infrequent tweeters.

Keep in mind that due to the way algorithm feeds work, it’s usually not necessary to broadcast information frequently, but you should still be tweeting content regularly.

Ready to turn up your Twitter engagement? I thought so. Use short social updates thatcombine several of the tips in this article—be approachable, keep it interesting and include a call to action. Those kinds of posts, combined with a level of curiosity, encourage some serious click-through power.

Be smart, deliberate and active and the engagement will come.

Steve Jobs Declared The Greatest Entrepreneur Of Our Time

Back in the day (whatever day that was), the race was to establish a presence…

Perhaps the most important part of current social media marketing is the hashtag. Hashtags (#)…