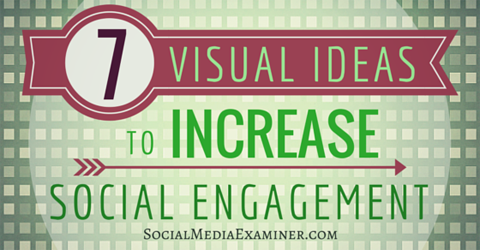 Want to know which types of images get more interaction?

The most engaging posts on social media are the ones that include images. Certain types of images receive more shares than others.

In this article I’ll share the seven types of images that get the most engagement.

Visual bullets are a collection of images that include a headline, at least two pictures and captions with each picture, like this pin from Whole Foods Market.

Visual bullets are images that include a headline, pictures and stand-alone captions. They inspire lots of engagement.

It’s important to pay attention to the anatomy of visual bullets. What defines a visual-bullet graphic is that each bullet refers to the headline, even if they do not really refer to each other.

Storyboards and visual bullets are similar; both of these image types have headlines and captions. However, there’s an important difference. While visual bullets are independent of one another, in a storyboard graphic you use interconnected captions to create step-by-step instructions or a sequential story that explains something to readers, like this image from online men’s shop BearingsGuide.com.

In this storyboard, readers learn ways to tie a scarf.

Use how-to storyboards like this one from ShowMeNow.com explain something related to your niche. It’s a great way to showcase your expertise.

Each of these storyboarding examples has a headline followed by sequential steps. With visual storytelling, you create useful information that your readers will comment on, like and share.

Visualize the meaning of a word or statement, and then create a graphic with impact.Illustrate words with humor or subtle visual tricks that make them more interesting. The idea is to give the viewers a “wow” moment when they realize how the visuals add meaning to the words.

Plays on words don’t have to just be words. They can be illustrated with photos like this one from Taco Bell.

This Taco Bell image suggests their Dr Pepper Vanilla Float Freeze has the same attributes as a handsome man in the cliché.

Sometimes the simplest pics are the cleverest.

The success of illustrated words really depends on how creatively you interject that meaning. The reward: those who spot the pun will feel “clever” and will want to share the image in order to find out which of their friends get it too.

Diagrams are a form of infographic in which you take a single image and pull it apart to explain the concept in the headline. It’s like the images you find in an anatomy book, where each part of the picture gets named.

Include interesting information to make this type of image more engaging. Disneyhas a series of style diagrams images for many of its characters.

This pop-culture image shows elements of a Disney character’s style.

Like storyboards, diagram images give you the opportunity to educate your readers or make them laugh.

Observational humor that’s not offensive appeals to lots of people without making anyone angry.

Don’t be afraid to go silly and creative (or both) when creating diagram images. Justkeep it in line with your branding and mission, so it’s not out of left field.

Memes, which are simple pictures with amusing captions, are a favorite among the social media crowd.

To create a meme, add a witty quote or caption to an image. The best memes have a message behind them. This image from HyperionTeens on Tumblr, encourages teens to read by playing on the ‘Keep Calm and Carry On’ meme.

Memes can offer a high return for the small amount of time you spend making them.Use a site like MemeGenerator to easily create memes with trendy images.

The best part about memes: people love to share and engage with them.

Visual captions can be images with accompanying text or graphically appealing text with an image in the background. These are usually factual statements or quotes.

Granted, visual captions aren’t nearly as funny as some of the other options. However, they’re good to use when you find an image in alignment with your brand or message. Converse posted this image on Facebook to share the message they’d joined Pinterest.

This caption’s picture is in line with the message, which is that Converse is now on Pinterest.

Like memes, the cost of visual captions is low. However, if you use them, step up your game and find interesting facts and quotes that people will want to share.

Comparisons take two images and identify opposing attributes. They often explain the types of things in life that are too obvious to notice.

You can use comparisons to inform and educate. If you find a visual method to share important information, it’ll get your point across in a more powerful way.

This comparison image from Whole Foods Market illustrates how big a role bees have in food production.

Use comparisons to surprise your readers. When you share information people don’t already know, it will prompt them to want to pass on the knowledge.

Adding a visual element to any post increases its visibility, as well as the opportunity for engagement. There are many tools available to create visuals, so it’s certainly worth the effort.

It’s hard to know ahead of time which images will get the most likes, comments, shares and retweets. Creating visual content requires trial and error, as well as a lot of creativity. So have fun with it!

Concentrate on these seven types of visual content to improve your chances of reaching a wider audience.

How to Use Social Psychology to Improve Your Marketing

Are you planning a social media campaign?   Do you wonder why some marketing campaigns…

How to Build a Social Community: 4 Tips

Does your business have a social community?   Are you looking for ways to stay…