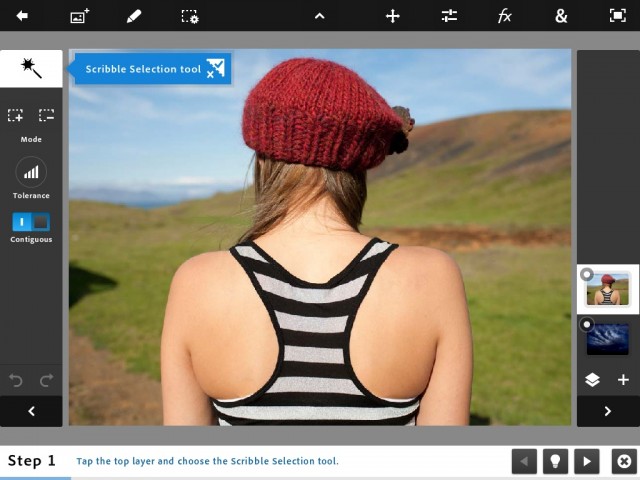 Adobe: For Some Things, Photoshop Is Better On The iPad

BARCELONA, MOBILE WORLD CONGRESS 2012 — If you thought that Adobe’s new Photoshop Touch was just a cut down, iPad-sized version of the desktop app, think again. I just watched a hands-on demo here at the Mobile World Congress in Barcelona, and this deceptively simple little app is pretty amazing.

Adobe senior creative director Russell Brown is is exactly the person you’d hire if you needed a great ambassador for your iPad creative app. With his short white chin-beard, thick-rimmed glasses and engaging (read: hilarious) presentation style, he’s also the perfect person to learn from. I asked him if there is anything that the iPad version of Photoshop does better than the desktop one.

“When they asked me what I wanted in this version of Photoshop,” he told me, “I said ‘It has to go as fast as I can think.’” And it does. Watching Brown’s demo, it was clear that he was making it up as he went along. An audience member — a Catalan businessman named Jaume who is “in cable” — challenged Brown to make a picture of him pulling on a cable.

Brown fired up the in-app Google Image search and found what looked like the cables of the Golden Gate Bridge (there’s regular search and also a Creative Commons search). He then set the layer to transparent and used the iPad’s camera to snap Jaume pretending to hold the cables. A little layer transforming later and they lined up well enough.

You could see how Brown was just trying things, and the speed at which he went through so many features was dizzying, although it was always easy to understand what was going on. Most impressive was the masking, which lets you cut things out of the background, among other things. “I think they tweaked the algorithms,” said Brown, talking about Photoshop’s Magic Wand and auto-select tools. “They seem better, more accurate.”

The other feature that really sets the app apart is ironically one that lets it play nice with the desktop. It’s called the Creative Cloud, and it’s like an Adobe-specific iCloud with 2GB storage. Brown said that the power had gone out on his demo iPad, and the new one “had none of my projects on it.” He signed in and — – Boom — everything was there. And because the Creative Cloud saves your documents with layers and even blending modes intact, you can open them up in desktop Photoshop.

Photoshop Touch certainly isn’t a replacement for Photoshop on the Mac, but for an iPad app it’s quite amazing how much it can do. And at $10, it’s also just one seventieth of the price.