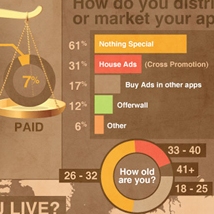 More than 400k Android apps are available in the official Android Market, aka Google Play Store. These apps are being developed by Android developers of various countries and cities.

These developers not only work hard, but also work intelligently to give users the ease to understand it. But have you ever tried to know about their hobbies, likes, and how they lead their life? Well I have a few friends who areAndroid developers, they are very dedicated and workaholic while doing the assigned work.

Here are some of the amazing facts you may like to know about Android developers (derived from the below infographic):

Below is an infographic by Startapp, which visualizes all about Android developers like their favorite types of movies, musics and other hobbies:

11 Ways to Get More Followers for Your Google+ Business Page

Do you want to grow your Google+ Page?   Are you looking for ways to…

Mark Zuckerberg Will Have a $1 Salary, Starting In 2013

Here’s another way that Mark Zuckerberg is following his idol Steve Jobs: He will have…

Doctors in the UK might soon be able to prescribe apps as well as drugs,…