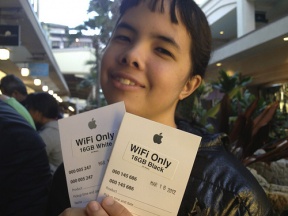 The age of the tablet is definitely upon us: figures out today from Gartner forecast that by the end of 2016 there will 665 million media tablets in use worldwide — a counterpoint to the sluggish sales we have seen in PCs in the last couple of years. This year, Gartner says there will be sales of 118.9 million tablets, growth of nearly 100 percent on a year ago.

But while the tablet market is picking up some momentum from competitors like Amazon and its Kindle Fire, and Samsung and its many sizes of Galaxy Tab, it looks like the day will continue to belong to Apple and its iPad.

Apple will continue to be the single-biggest vendor of tablets for the next four years, holding on to more than 45 percent of the sales in that time — although that represents a significant decline from the 83 percent market share that Apple had in 2010 and the 61.4 percent that Gartner estimates Apple will take this year.

Android’s share, meanwhile, is steadily growing. Android tablets will account for 31.9 per cent of media tablet sales in 2012, with that number rising to 37 percent by 2016 — getting close to, but not overtaking, Apple. The main issue, says Gartner, is that Android tablets still do not have the same breadth of applications as the iPad. Amazon’s appstore, for example, currently has around 34,000 apps, compared to the hundreds of thousands for the iPad.

Microsoft, with the introduction of tablet-friendly Windows 8, will make some, but not much, headway in tablets. By 2016 it will not have more than 12 percent of the market, Gartner predicts. That’s still growth from 4.1 percent this year.

One opportunity ripe for the taking — not just by Microsoft but others, too — is the enterprise market. Gartner says that 35 percent of all tablets will be sold for business use by 2015, although many of those purchases will be in the vein of “BYO” devices, meaning that those sales will be done outside of corporate channels. “More of these tablets will be owned by consumers who use them at work,” the analysts say.

In all, it looks like Gartner is being very bullish on sales of the iPad. Gene Munster from Piper Jaffray believes that Apple will sell 66 million iPad tablet this year, but Gartner is putting the figure closer to 73 million worldwide:

What about usage? One noteworthy fact is that for the moment tablets are proving to be more like smartphones and less like PCs in terms of their disposability: Gartner says that about half of all tablet owners replace their devices within 24 months of buying them.

In terms of actual apps — developers should take note here — there is a very strong correlation between smartphone and tablet apps: Gartner’s analysts have found that 40 percent of apps that users have are actually the same on both devices. In other words, if you are making an iPhone or Android smartphone app, you might find you have an easy sale in the form of a corresponding tablet-optimized app.

And while PC sales growth has been slowing down, it looks like that will continue to be stronger than tablet sales for the next several years. According to the most recent figures from Gartner, from January 2012, the PC market will see sales of 536.3 million units in 2015, counting both desktop and laptop PCs. A spokesperson tells us that Gartner is actually releasing more up-to-date PC forecasts this Thursday, and these might give us more insight on how 2016 will look.

Creating a Facebook audience from scratch isn’t easy. Some big brands are able to get…

Important E-Mail Marketing Metrics and Why They Matter