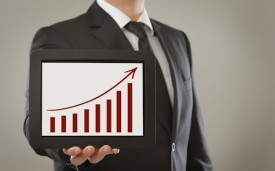 Apple has a lot riding on the success of the new iPad. It’s the company’s only big launch this year until the iPhone 5 is expected to launch in October.

Apple’s quarters are different from most companies — its fourth quarter ends in September, so sales of the new iPad are essential to meet analysts’ profit projection numbers for 2012. iPad sales in the first quarter of 2012 (October to December 2011) hit 15.4 million — a rise of 111%. Apple’s new iPad was announced on Wednesday to eager reporters and tech insiders. After news of the “new iPad” circulated throughout the Web, people took to Twitter to give a collective, “meh.” In fact, on Wednesday “iPad” was not even the top trending topic on Twitter and by Thursday it disappeared from the Twitterverse’s trending topics completely.

Analysts predict Apple’s revenue growth will increase by more than 40 percent and earnings should grow by 54 percent by the time Apple’s fiscal year ends, Tech Analyst Rick Munarriz from TheMotleyFool told Mashableon Wednesday. But that’s only if Apple’s earning continue to grow like they are now.

Mashable emailed Apple for comment and is waiting for a response.

A growing percentage, now 76 percent of the company’s revenue, comes from iPhones, iPads and iPods — everything that works on the iOS.

“Apple does not make money on selling content,” said Horace Dediu, a mobile analyst with a focus on Apple, who is also a television host and blogger for Asymco.com. “Although last year they received about $10 billion in gross income from iTunes, that business is running at break even. Whatever is left from paying for the content itself (music, video and apps) is used to operate the store and the payment system takes a cut as well.”

Mashable and other news outlets reported a study by iSuppli in 2010 that showed the iPad costs roughly half its retail price to manufacture.

“The highest margin product is the iPhone, at above 50% gross margin,” said Dediu. “But the iPad is not far behind at about 33%. It’s higher than the iPod and the Mac which are both around 20% to 25%. The typical PC from HP or Dell barely gets 10%.”

Android is actually outselling the iPhone in terms of units — and taking market share away from the iPhone. But Apple is the market leader in smartphone sales and makes the largest profit. It’s the most valuable company in the United States, regardless of industry, Munarriz said. It’s a $494 billion company — five times the value of Facebook.

“Apple’s been one of the best stocks over the last 10 years,” he said. “Apple’s Renaissance — you can almost tie it to the iPod release in 2001.”

Will the new iPad will be as popular as the previous two, continuing to generate massive profits for Apple?