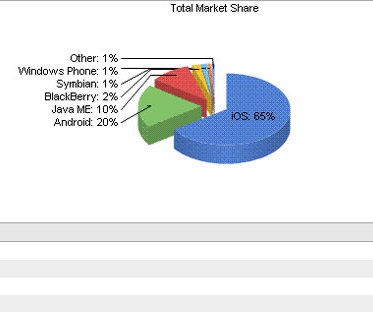 Apple has continued to take an increasingly larger share of mobile devices tracked by Net Applications, reaching more than 65 percent in the month of June.

The 65.27 percent share of Apple’s iOS platform, which is found on the iPhone, iPad and iPod touch, was up from 62.65 percent in May. Apple’s share has steadily risen, growing from a 53 percent position in August of 2011.

Apple’s next closest competitor in mobile browsing market is Google’s Android platform, which took 19.73 percent in the month of June. Android has also seen its share grow since last August, when it took 15.98 percent of mobile browsers.

The gains for iOS and Android have been losses for Research in Motion’s BlackBerry and Nokia’s Symbian platforms. BlackBerry has fallen from 3.33 percent in August of 2011 to 1.87 percent in June, while Symbian has dropped from 6.21 percent last August to 1.49 percent in June.

Are you struggling to make social media work for you?   Do you have the…

How to Take Your Visual Content to the Next Level

The Adventures of Tintin: The Game is out for iOS & Android

Are you ready to experience a real adventure? Join Tintin and his trusty sidekick, Snowy,…