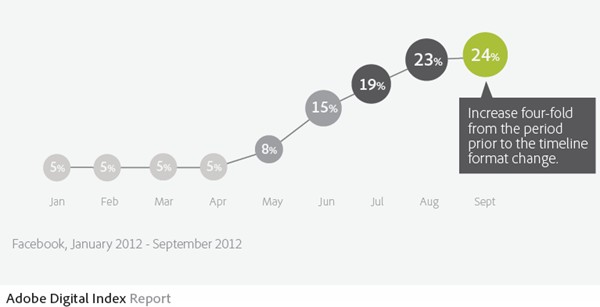 Among Facebook audiences worldwide, engagement with brands, via likes, comments, and shares, is surging in 2012, according to report by Adobe.

The findings are based on Adobe’s Digital Index, which covers some 260 billion ad impressions across 338 companies as well as Facebook activity among roughly 70 million fans.

As of the third quarter of 2012, engagement levels with Facebook brand posts jumped 896% over those recorded a year earlier (index base of 100%). The figures below show quarterly index changes over the 3Q11 baseline for brand post engagement:

Those increases in engagement are due to three main factors, according to Adobe:

Below, other findings issued by Adobe.

Smartphones may also have contributed to the spike in engagement.

Mobile users accounted for nearly one-fourth (24%) of all Facebook engagement in 3Q12, up fourfold from the period prior to the Timeline format change: Other key findings for the third quarter of 2012:

Adobe also issued projections for the fourth quarter of 2012:

About the data: Findings are based on Adobe’s Digital Index, which covers some 260 billion ad impressions across 338 companies and Facebook activity for 70 million fans, captured by Adobe AdLens and Adobe Social for the third quarter of 2012. All brands are Adobe clients from a range of industries, including automotive, CPG, financial services, media, entertainment, and retail.

If I Were Starting Social Media from Zero

A couple of months ago without notice, all of the social media sharing counters on my primary…

5 Best Ways to Integrate Instagram Into Your Social Media Campaign

Ever since its release 3 years ago, Instagram has managed to nab over 100 million…