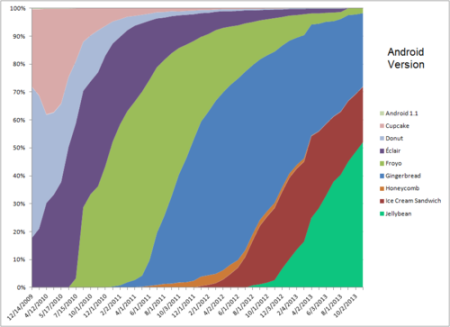 FORTUNE — The chart at right, taken from the Wikipedia entry forAndroid version history, illustrates the problem app developers callAndroid fragmentation — the splintering of Google’s (GOOG) installed base into incompatible fragments. Applications that run on one combination of hardware and software don’t necessarily run on others.

Wikipedia doesn’t offer a similar chart for Apple (AAPL) iOS, and the graphic below, created for us by Chitika, suggests why.

Unlike Google, which gives hardware manufacturers license to modify Android, Apple controls both the hardware and the software. That gives Apple two advantages that matter to developers:

UPDATE: To facilitate apple-to-apple comparisons, reader marc (full name withheld) has eyeballed the data and created new versions of the charts in which the colors, the date range and the orientation are roughly the same.