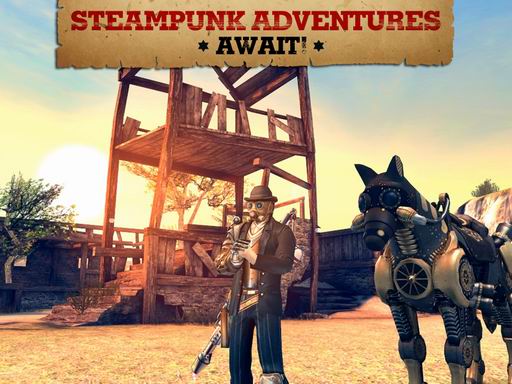 Something futuristic is rolling into Six Guns on iPhone & iPad! If you haven’t already, be sure to update your game to play a more futuristic version of Six Guns! That’s right, Steampunk is coming to Six Guns! If you aren’t in the know, Steampunk is a sub-genre of the sci-fi & occasionally horror genres, that brings futuristic elements to the past, more specifically the American Frontier where steam power was widely used. Think Sherlock Holmes, Jonah Hex, Sleepy Hollow, or the City of Lost Children if you are into foreign art-house films. Just image the amazing technology described by H.G. Wells or Jules Verne showing up in the wild west!

The new Steampunk update includes new missions, weapons, clothes, & even a new Steampunk inspired horse, the blazing fast “Black Shadow!” Plus, we’ve added a few bug fixes and optimazations to make Six Guns run better than ever. And if that isn’t enough, you will also get rewards in the form of free cash for sharing your progress through the game on Twitter and Facebook… And really, who doesn’t like free cash?

So saddle up for another wild ride through the past, but watch out for your neighborhood zombies, vampires, werewolves, witches and the rest of the creepy crawlies hiding in the American Frontier! Download Six Guns foriPhone & iPad today!

Some argue that search engine optimisation (SEO) is a flawed concept. At its best, it means no…