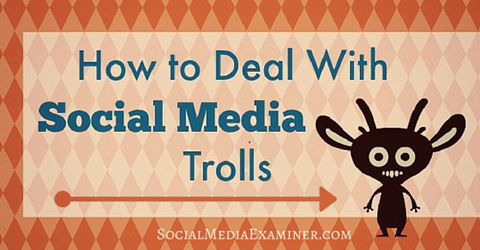 How to Deal With Social Media Trolls

Do your social media accounts get negative comments?

Have social media trolls wreaked havoc for your business?

How you respond to trolls can impact your brand and reputation. A few tactics can help you defuse the negative situation in the best possible way.

In this article I’ll share how to respond to social media trolls, as well as how basic guidelines keep your community troll-free.

Discover how to deal with social media trolls.

Trolls are the people online who purposefully stir up trouble in social media communities. It’s important for companies to deal effectively with trolls so they don’t tarnish your brand and sully your online presence.

An effective way to disarm a troll is to use humor.

For example, Sainsbury’s, a grocery chain in the United Kingdom, responded to a chicken critic in a lighthearted way with a similar metaphor.

Sainsbury’s response is excellent for a few reasons. First and foremost, they didn’t ignore this customer’s tweet. They recognized the problem (bad chicken), apologized and offered a witty reply on the same level as the criticism. They turned a negative comment into an engagement opportunity. Their reply resulted in 141 retweets and 72 favorites.

A troll blamed O2, a UK SMS system, for a girl not responding to his texts. O2 responded with a humorous recommendation.

@O2 called out and disarmed this troll with a tweet that was retweeted more than 200 times and received 100+ favorites.

When you make light of a troll’s tweet, you simultaneously acknowledge and defuse the situation.

If trolls are spreading rumors, tweeting wrong information or posting inaccuracies, nip it in the bud. The best way to disprove tales told by trolls is with facts.

Remember bendgate? Apple’s release of the new iPhone 6 didn’t go as smoothly as planned. With rumors that the phone could bend in your pocket came the infamous hashtag #bendgate, and a lot of trolling.

Trolls posted a lot of gags as they jumped on the Apple iPhone 6 #bendgate bandwagon.

It seems many Internet trolls were creatively inspired by #bendgate rumors.

No doubt about it. Internet trolls had a blast making fun of the iPhone6 #bendgate.

Apple took a stand and responded to this crisis. The company admitted the phones could bend, but said it wouldn’t typically happen with normal iPhone use.

Turns out bendgate was much ado about very little. Apple received only nine complaints about bending, and shared that information as well.

Apple responded to the rumors of bending iPhones with facts.

Apple chose to address the issue head-on. They admitted there was an issue and that the issue affected very few customers. In doing so, they were able to stop any further controversy.

Commenters, followers and fans aren’t the only trolls on the Internet. Sometimes brands become the offenders. “Corporate trolling” is when companies troll their fans.

There is a fine line between being fun and engaging and simply being offensive. It’s better to err on the side of nice than what could be perceived as nasty.

In its efforts to make its brand more appealing to young people, Tesco Mobile started its #nojoke campaign. Basically, their Twitter admins responded to negative tweets about Tesco Mobile by poking fun at their haters.

Tesco’s #nojoke campaign rode the line between funny and snarky.

As mentioned above, responding with humor is a good thing. However, it’s much better when your jokes are actually funny.

Tesco’s company trolling tactics got a lot of engagement, but were borderline obnoxious.

Fans tend to be more forgiving of a large brand than a small one that’s still finding its tone and voice.

Until your company hits the “big time,” you’re better off making a good impression of being kind and likable. Don’t become a troll. Instead, focus on dealing with your own trolls.

How to Keep Your Community Troll-Free

When it comes to dealing with trolls, knowledge of your online space is key. Here are tips on how to protect your online community.

1. Be an active member of your community. Closely monitor the conversations of your followers and fans on your social media channels. That way you can step in if trolling or bullying becomes a problem. Read all of your comments so you know the context and can respond appropriately.

2. Set boundaries. If you have a troll problem or want to make sure you don’t run into one, set guidelines for your community to manage expectations. Post online etiquette in a visible place on your social channels or share a link to a blog post on the subject.

Make sure you have guidelines in place. Image: Shutterstock.

Guidelines should be reasonable (for example: no abusive language, no harmful remarks, no bullying), but not too harsh. Also, let your community know what will happen to people who cross the line. Will you delete their comments? Ban the user? The goal isn’t to completely obliterate all negative comments, it’s to make the community a safe place for your fans.

3. Always be nice. Treat all your fans, followers and trolls kindly. Behind every troll lies a real, breathing person who has feelings. In most cases trolls are looking for a reaction. Just keep your cool when the going gets tough.

The worst way to deal with a troll, hater or even just a disgruntled customer is to be impatient, sarcastic or combative. Just “don’t feed the trolls,” and you’ll be fine.

As tough as it may seem to deal with trolls, there is a way to do it with grace. Just keep your cool. Use humor, facts and kindness in responding to trolls, and you’ll make your community a safe and fun place for everyone.

Trolls are people too, and respect is the best policy online. Keep that in mind when interacting with people on the web, and you’ll find it’s a piece of cake to tame the trolls.