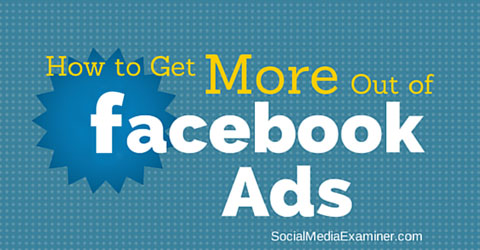 Are you struggling to find ways to get noticed on the platform?

With each update to Facebook, it becomes increasingly harder for small businesses to make a splash in front of their intended audience.

Here are four marketing tactics you can use to get more out of your Facebook advertising.

Find out how you can get more out Facebook advertising.

Do you have a certain benchmark you want to hit? Whether you want page or post likes, there’s a simple solution. It may go against your instincts, but straight-up ask for the number of likes you want. And add an incentive to move things along.

For example, Subway asked for 40,000 likes on this post. The incentive: once they reached the milestone, they’d release a code that leads to a promotion. Only then could people enter to win “Free Subs for a Year.”

Subway gave away something of relatively small value, and got back something priceless. If you do the math, that’s a pretty good deal for Subway. They got more than 60,000 likes, more than 800 comments and more than 1,500 shares. That’s pretty much viral status for a single post, and all they had to do is provide one person with free subs.

After you come up with your promo idea, remember these key elements when you create your image.

For example, check out the pair of delectable, photogenic beauties Subway displayed. Look at the perfectly layered tomatoes, stacked to the brim with loads of meat (no extra charge for double) and melted cheese encased in a perfectly rounded bun. Subway displayed one beef and one chicken, showcasing two of their customers’ main preferences. All promo pics should be that enticing.

Include the offer in print within the image.

People scrolling through their Facebook news feeds aren’t always going to read the accompanying text that goes with a post. However, if you place the offer at the top of the image itself in large print, you’ll get a few eyeballs that would ordinarily miss it.

It never hurts to ask, so start asking. Create something eye-catching with a definite call to action.

People love to show off things related to their youth: they share pics, take quizzes and participate in pretty much anything that takes them back to an earlier time. Music videos on YouTube from the 80′s and 90′s get tons of traffic and engagement. And then there’s vintage logos and products that adorn t-shirts that get everyone talking. So, if it’s feasible, give your audience something to reminisce about.

Gatorade did a timeline of how their bottle evolved over the years. The graphic, caption and hashtag speak to their target audience. The viewer is privy to seeing the different points in history where Gatorade changed their packaging. And you never know when the trivia will come in handy. (Next time someone’s belting out trivia with their friends at the bar, they can always drop the factoid that Gatorade has been in existence since 1965.)

Gatorade showed how their packaging evolved and was rewarded with nice engagement.

When visually sharing history of your product or brand, here are a few things to include.

If you’re showing how your product evolved, choose key points that are noticeably different. Gatorade shares the full spectrum of designs coming at you in one instant. This also has the effect of showing diversity to the consumer. Diversity is good—it gives the illusion of choice, and people like choice.

An overriding consistency factor makes the differentiation even better. Gatorade showed how their product evolved and did it all in the same flavor: lemon-lime. In this visually appealing photo, they allude to the company’s rich history with the lemon-lime coloring. Plus, the bottles are lined up and taken on an angle shot to give the impression that all of the bottles average out to nearly the same height.

Build upon an existing theme (or meme).

By ending the post with the #TransformationThursday tag, Gatorade is building upon the #ThrowbackThursday tag, and created their own hashtag in the process. They’re latching onto Thursday as a day to take Facebook users back to the past, while displaying the product at different points in time, thus showing off more of a ‘transformation’ than a ‘throwback.’

This #ThrowbackThursdap post from L.L. Bean generated much more visibility than their average posts.

When friends show their vacation pictures in the Facebook feed, there’s just one problem that hinders the viewer’s vision of escape: these glorious pictures have other people in them. If you really want to engage your fans in some fun escapism, share a relaxing picture (with no other people) they can step into. While you’re at it,throw in a catchy message. In some instances, you don’t even need to include the product.

Hollister is a beach-centric clothing line. This Facebook photo doesn’t promote the brand as much as it promotes the experience. This simple pic received tremendous engagement: more than 32,000 likes, more than 300 comments and nearly 500 shares. Did you notice? There’s no Hollister clothing in this image.

Hollister sells beach clothing. However, they’re promoting not the clothes, but the experience.

To get the ball rolling, here are a few things you can do to employ this tactic in yourFacebook marketing.

Questions lead to comments, and comments are more valuable than mere likes. What is spring break all about? Well, it probably means a lot of different things to a lot of people. But most people will definitely have an opinion and/or a story to share.

Allow the image to breathe.

A basic beach scene should be simple, and this one is everyone’s dream scenario: a whole relaxing beach all to yourself. There’s the lifeguard tower, hotels and a good number of palm trees. The Hollister logo is imprinted on the vast expanse of sand. It’s not about the brand, it’s the aura. The brand’s just along for the ride.

Nike Golf is a master of this tactic.

Be succinct. Add simple text to your basic pic.

Good things often come in threes: “Hot Sun. Warm Sand. Spring Break.” The audience may not necessarily be experiencing these things right now, but they probably wish they were. Try to sum up your escape scenario in just a few short phrases.

Not every promotion, picture or status update needs to be about your product. Find creative associations that spark interest and engagement from your fans.

There’s always something going on. Perhaps there’s a big sporting event coming up. Maybe a much-beloved television show is coming to its conclusion or a reality show is wrapping. It could be an awards show or holiday. Whatever it is, there’s always a way to latch onto an event, and make it about your company or brand.

At the end of an American Idol season, AT&T asked a question on the minds of viewers everywhere: “Who are you voting for?” They were rewarded with massive likes, shares and comments.

AT&T capitalized on the buzz from American Idol in their social media.

If you’re going to try this kind of promo, here are a few things to keep in mind.

Of course you want people to share their opinion of who they think will win, and naturally they’re going to do that in the comments. But don’t let it end there. Include a link to where they can actually vote. You don’t need to direct the activity on your post—let users interact and then learn, see or do more.

Don’t post during or even when people are getting ready to go to or watch the event.Post in the middle of the day. Let the people who are checking their Facebook feed in anticipation engage and lift the post up from there. The post should really peak an hour or two before the event, but it needs a build-up, and you don’t want to post too early.

Make it about the event, not you.

Your branding should be simple, understated and off-to-the-side, if at all. People know it’s your account that’s posting, and enough of them will remember. There’s no need to overwhelm them with a large splash of your logo. Put the focus on the event, and just play your part as facilitator of the enthusiasm.

SouthernBite’s Halloween themed post was shared over 4K times in less than 24 hours.

There’s always something going on—whether it’s in the media, sports or a traditional or manufactured holiday. Find ways the things that are happening connect to your brand, and make them part of your social media outreach.

There are many simple, creative things you can do to get your brand noticed on Facebook. Just make sure you provide value. And, whenever you need inspiration, just check out the competition.

How to Create Social Media Images That Support Your Brand

Are you getting maximum results from your visual content?   Do you use fonts, colors…