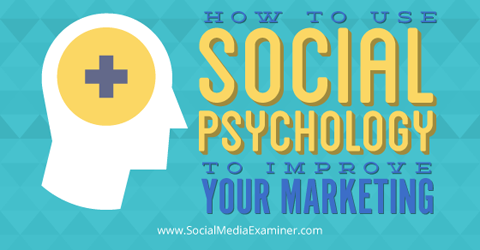 How to Use Social Psychology to Improve Your Marketing

Are you planning a social media campaign?

Do you wonder why some marketing campaigns are more successful than others?

In this article I’ll share the concepts ALS used to achieve overwhelming success and how you can use them.

Find out how to use social psychology to improve your marketing.

We are more likely to act on and complete a task when we promise ourselves we’ll do it. The obligation is amplified when we make a commitment publicly—we put even more pressure on ourselves to follow through so we don’t risk both personal and public letdown.

Publicly passing a challenge to others compels them to take action.

The ALS Association used this concept in a somewhat different (but equally effective) way: participants weren’t making the commitment themselves; the person nominating them was publicly making the commitment for them. This form of peer pressure makes the nominated person feel morally obligated to accept (commit) and follow through.

Take a step back and look at your campaign to see if there are opportunities to ask people to make a public commitment.

For example, if you’re hosting a free event and are afraid people will sign up but not show up, add an extra step after registration asking them to share their activity on their social networks. Their public commitment increases the likelihood that they’ll show up.

It’s important to understand the motivating characteristics of your audience.

The Ice Bucket Challenge was essentially saying, “You see yourself as charitable [an assumption] and if you are in fact charitable, you will do this. Otherwise you’ve shown that you are not charitable.” In situations like this, people choose to participate rather than challenge their identity.

“If you’re the type of person who appreciates creativity, rarity and perfection [identity characteristics], our new Imperial Court Wood Sofa [your product/service] will speak to you.”

Those who identify with the characteristics of creativity, rarity and perfection are drawn to the sofa because they want to reinforce their identity.

Most people are attracted to something not everyone can have. Image: Shutterstock.

When something is exclusive, limited or rare, it has greater influence on our actions. People who were invited to participate in the ALS challenge were compelled to act because they subconsciously wanted to be a part of this exclusive club and say, “I did the Ice Bucket Challenge.”

In addition to invitation-only events, marketers commonly create a sense of urgencyand exclusivity by limiting the number of items available and the amount of time they are accessible.

The invitation-only tactic is easy to implement, but it’s a long-term commitment because it usually takes a great deal of time and effort to get the ball rolling.

Create an invite-only group on the social network you and your audience use most.Start off by inviting a mix of industry experts, and then publicly promote the group. At the same time, show members the group’s value and explain what others need to do to be invited to join.

I suggest making the requirements somewhat difficult in order to retain exclusivity and thus the appeal of being included.

Another idea is to offer a limited number of items to dramatically boost the urgency to act. People don’t want to feel like they’re going to miss out, so having a limited quantity of something may be the extra push your customers need to take action.

Similarly, limiting how long a product or service is available is a powerful way to influence behavior.

Let’s say you’re an NFL merchandise e-commerce shop. You develop a promotion that runs for the entire football season where whichever team is ahead, their merchandise is 10% off during the game. Once the game is over, the promotion ends.

Twitter would be a good channel for a campaign like this. You could give score and game-time updates as a countdown, adding pressure to make purchases before the game ends.

The ALS Association leveraged basic psychological concepts to drive hundreds of thousands of people to take action and spread the word about their cause. Whether you were a participant or a skeptic, there’s no question that the Ice Bucket Challenge was a marketing smash and exceeded the organization’s expectations.

Now that you have an understanding of these concepts and how to apply them, it’s your turn. Find creative ways to bake them into your next campaign and you’ll see the influence you have on others.