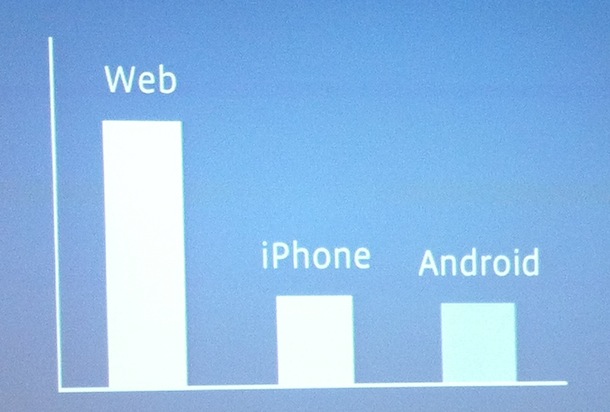 This post is part of our ReadWriteMobile channel, which is dedicated to helping its community understand the strategic business and technical implications of developing mobile applications. This channel is sponsored by Alcatel-Lucent.

James Pearce, head of mobile developer relations for Facebook, likes to point out that “you and your friends don’t always have the same devices” or even use the same mobile platforms.

That’s a problem for the company, as it has to support all the major platforms, from Apple iOS to Google Android and beyond – often putting it in the position of benefitting its competitors. But it’s also a huge opportunity for Facebook itself to shape and dominate that common platform.

At a small lunch with reporters on the social media giant’s luxe new Silicon Valley campus, Pearce explained that the mobile issue is far from trivial.

“Mobile is the epitome” of social, Pearce claimed. “If Facebook were built today, it would be a mobile app.” He had numbers to back it up: Facebook currently has 425 million mobile users (compared to 825 million total users).

But those millions are fractured among native apps running on specific mobile platforms and browser-based mobile Web apps. Surprisingly, according to Pearce, Facebook’s mobile Web app usage outweighs that on Android and iOS combined. Mobile Web apps give the company the opportunity to be the glue for that common platform, if it canconvince developers to use technologies like HTML5 to create mobile Web apps that tie into Facebook for distribution and sharing, instead of relying on native platforms (and their individual app stores and ecosystems).

The problem is that HTML5 still has many weaknesses – no access to the phone’s camera and other hardware, no DRM support, streaming and performance issues, and more – compared to native apps, so the company is working hard on many fronts to overcome those objections and convince developers – especially smaller ones – to see HTML5 as a valid option.

Those efforts include OpenGraph, which gives mobile developers a structured way to control how their apps interact with Facebook. And support for the Core Mobile Web Platform Community Group, or coremob.org, of the W3C – which brings together developers, carriers, phone makers and browser developers – is also underway to prioritize which HTML5 issues to work on first and test”which browsers have a chance in hell of supporting what [developers] are trying to build.”

The situation is complicated by the fact that many potential participants have conflicting interests. Apple and Google have so far declined to join, for example. “As a browser vendor, I can’t see why you wouldn’t want to maximize the number of apps that run in your browser,” Pearce – a former schoolteacher – asked rhetorically. But Apple and Google also have giant mobile device businesses they want to protect, and Facebook’s promotion of mobile Web apps over native apps could cut them out of the loop.

Pearce admitted that today, at least, there’s no one answer as to whether it’s better to develop native apps for mobile Web apps. It depends on what the app does, he said, and how much the developer wants to broaden its footprint. “We present the decision tree, and we will be there for them whatever they choose. We won’t choose for them.”

He also acknowledged that the choice isn’t binary, with many “hybrid” apps combining native and mobile Web functionality. And that approach is core to Facebook’s own approach.

“We go through the same process” for Facebook’s own apps, Pearce said. But whenever possible, Facebook “uses the mobile Web app” and “we work hard to make the mobile Web experience similar” to the native app experience. So, it creates hybrid mobile apps that rely on the browser as the primary rendering engine but use a native “shell” to access device functions that a browser can’t reach on its own.

Facebook, Pearce said, wants to be the platform of choice for mobile developers – if not a technology platform, then a distribution and discovery platform. The company clearly doesn’t want to remain beholden to the iOS and Android app stores for how people find, buy and share mobile apps.

Facebook wants to be at the center of that ecosystem. That’s why HTML5 and mobile Web apps are so appealing to the company – and so threatening to Apple, Google and any other company tied to its own devices and platforms.

Are you looking for creative ways to improve your Twitter updates?   Do you want…