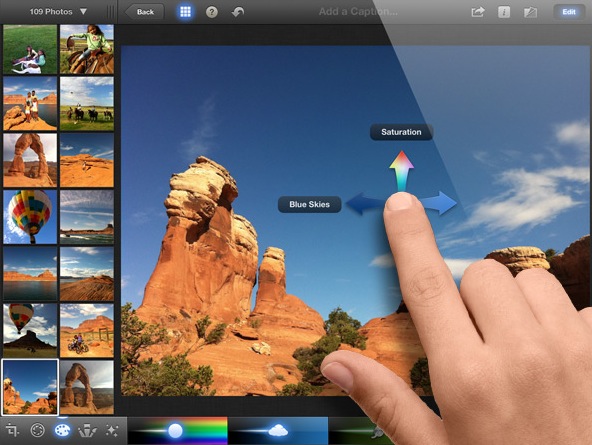 It’s all about software.

Watch the video of this morning’s iPad event, and note how Apple’s execs spend more time talking about the apps that the new iPad can run than the new iPad itself.

Back in 2000, when Steve Jobs launched Mac OS X, he asked Apple’s software partners to port their applications to the new operating system. Many of them balked, because it was expensive and they thought Apple was heading down the pipes. So Jobs ordered his programmers to develop a suite of programs in-house. The result was iLife, a winning suite of lifestyle applications that turned out to be a key differentiator for Windows users thinking of switching to the Mac. Right out the box, the Mac had great software that helped new users to do the things they wanted to do — edit videos, manage digital photos and make DVDs — minus the hassle of installing and configuring tricky software.

Now Apple is doing the same thing with the new iPad: loading it up with world-class software that its competitors can’t match.

Don’t get me wrong. The hardware is very important. In fact, it looks amazing. The hardware is as good as most laptop hardware and better than the leading game consoles. It’s astonishing that there’s now a sub-$1,000 consumer device that can not only shoot 1080p HD video, but can also edit it and share it wirelessly at near-broadband speeds.

It’s likely that Apple’s rivals will match the hardware this year. They have access to the same Asian factories as Apple, and will eventually offer hardware that’s as good, or nearly as good, as Apple’s (whether they can match Apple’s prices is a different matter).

But as Tim Cook noted in his introduction to this morning’s iPad event, it’s the software that Apple’s competitors can’t match.

Cook noted how rivals have launched about 100 tablets to compete with the iPad, but the experience of using them is subpar.

“It kind of looks like a blown-up smartphone app — because that’s exactly what it is. Compare that to Twitter on iPad,” he said. “Look at Yelp. Lots of white space. Tiny text, hard to read. Compare that to the iPad. This is a reason momentum on the iPad that continues to build.”

Of course, Cook was talking about third-party apps. And there are plenty of subpar apps in the iTunes App Store.

But Apple has the momentum. As Cook noted, there are half a billion apps in the App Store, which has just clocked 25 billion downloads. It’s a virtuous cycle:

Take a few minutes to watch the event video and see what kind of amazing software Apple’s third-party developers are cooking up for the new iPad. Look at the incredible graphics of Infinity Blade, or the ease of making an online photo scrapbook in the new iPhoto, and tell me it’s not all about the software.

As Phil Schiller noted: “We believe technology is at its very best when it’s invisible. When you’re​ conscious only of what you’re doing, not the device you’re doing it with… It’s just this magical​ pane of glass.”

As online shopping continues to grow as the commerce method of choice for US consumers,…

Kodak has released its Professional Film iPhone app, which has been designed to answers…