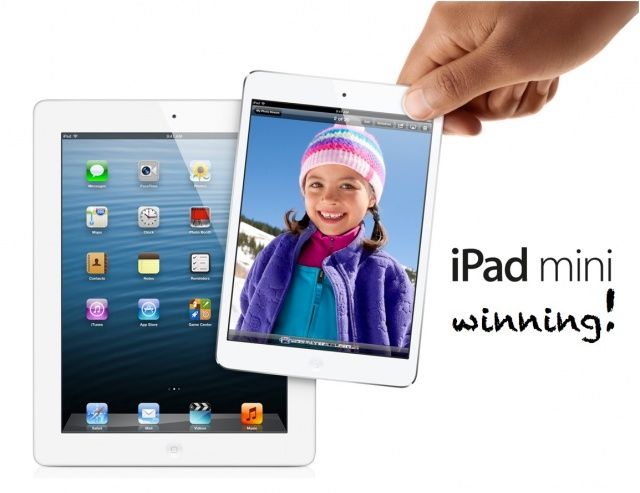 Apple launched the fourth-generation iPad back in October, introducing a new A6X processor, a FaceTime HD camera, and its new Lightning connector. But despite those improvements, it appears the device isn’t selling as well as its predecessors. The reason? Another tablet is “cannibalizing” its sales.

But that tablet isn’t from Microsoft, or Google, or Amazon — or any other manufacturer for that matter. That tablet is the iPad mini.

According to an investors note from Citi, Apple’s new 7-inch iPad is killing its bigger brother. In an poll of 50 Apple stores, Citi found supplies of the iPad mini to be limited, while the fourth-generation iPad was there in abundance.

80% of the stores called said that “some version” of the iPad mini was available, CNET reports, but 96% said that “overall availability was limited based on the amount, storage options, and colors consumers were seeking.” It appears that the 32GB iPad mini was the model that was easiest to get hold of.

In comparison, 100% of the Apple stores contacted had the new iPad (the 9.7-inch model) in stock, while just 6% said supplies were limited. Citi analyst Glen Yeung said in his note: “While not explicitly asked, it is clear in our survey work that [the] iPad 4 is not selling well, cannibalized by Mini sales.”

Yeung estimated that Apple had lined up 10 million iPad minis for this current quarter, and 10 to 15 million units of all other iPads combined. It’s clear that the Cupertino company expects the iPad mini to be a big hit this Christmas, then — and significantly more popular than its siblings.

Yeung did not ignore the fact that iPad mini supplies were also limited due to manufacturing issues. He acknowledged a November 27 report in which it was claimed one of Apple’s two display manufacturers, AU Optronics, was having production yield problems that are causing supply constraints.

However, AU Optronics has since dismissed the report, insisting its iPad panel shipments remain on target.