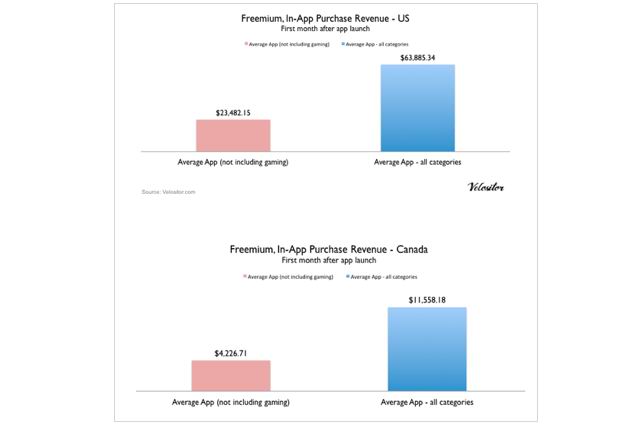 Mobile app research firm Velositor has released some very interesting facts about iPhone in-app purchases. A practice that is becoming increasingly common in games, as well as productivity and social networking apps, app developers are making upwards of $63,000 in their first month from in-app purchases.

The study breaks down the amounts between game- and non-game apps, as well as between Canadian and American users, but the numbers speak for themselves.

The numbers seem absurdly large, and considering these are averages, this means that developers with the most popular apps are likely earning millions of dollars from in-app purchases. The freemium model, which allows users to download and begin playing a game without paying, allows users to typically buy in-game currency, extra filters or premium features for a small price. This gives developers more traction in designing and releasing addictive games that can be funded with by those who want to enhance the gaming experience, without sacrificing the quality for those who don’t want to spend anything.

Titles like Tiny Tower, Temple Run and, to a lesser extent, Path have taken this approach. Some users accuse developers of being greedy by creating games and apps that are not fully functional, or by designing games that cannot be beaten without spending money after downloading. Others are citing in-app purchases as the saviour of the excessively-low prices in the mobile app market, bringing revenue to dev teams who have languished in poverty for too long.

How to Grow Your Leads With Social Media Marketing

Do you need more leads for your business?   Are you looking to better understand…