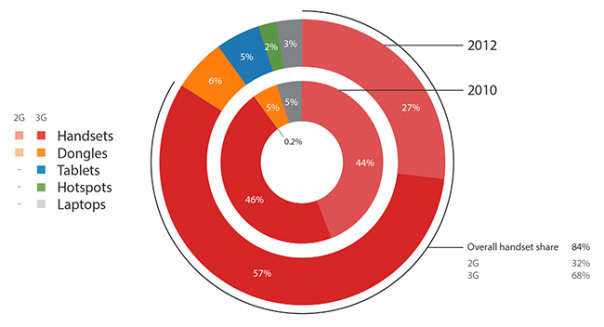 The iPhones, the Androids, the iPads and hot-spots — whatever the device might be, one thing is for sure: the demand for mobile broadband is continuing to grow unabated. Two different reports, one from Akamai and another from Chetan Sharma show that we are using more mobile data in more places, and this is going to keep changing how we live, work, create and consume.

Chetan Sharma, an occasional analyst for GigaOM Pro in his State of Mobile Market 2012 report shares the following stats, that give you a sense of change.

The data from Akamai has even more interesting findings. For instance: The shift to mobile data is causing quiet upheavals in the industry. For instance, the highly lucrative voice and messaging revenues are vanishing fast, and are being replaced instead by the over-the-top services such as Skype, Nimbuzz, Voxer and other apps such as WhatsApp.

Chetan Sharma succinctly sums it all up:

As a result of the data tsunami, there are two types of opportunities that are being created, one that takes advantage of the data being generated in a way that enhances the user experience and provides value and the other in technologies that help manage the traffic data that will continue to grow exponentially.

So far the carriers are responding to these shifts by experimenting with newer usage plans, and raising prices. But those are short term fixes, for the wireless carriers need to totally re-imagine their value proposition.