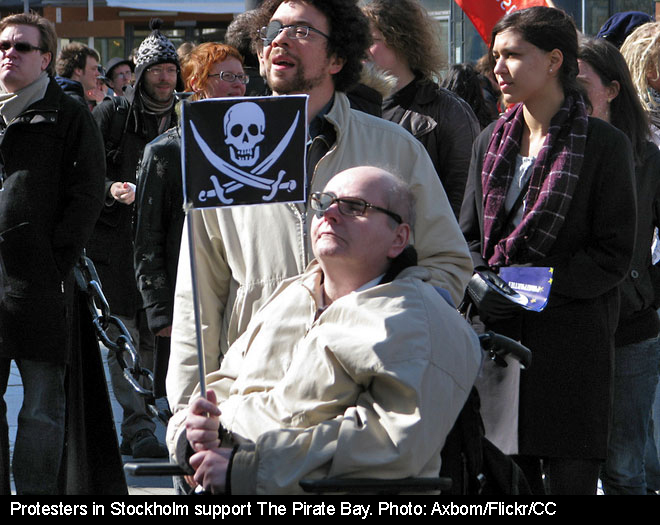 When I was 9 years old I got my first computer, an Amiga 500. It was the best computer ever built, with great graphics, amazing sound and seven times faster than the Commodore 64. One of my friends said that the Amiga was useless since you needed to boot it from floppies. On the C64 you could program without even a cassette.

Of course the C64 died while the Amiga flourished. The Amiga later died when even better technology came along. We all know how evolution works, except one industry that refuses to evolve: the entertainment industry.

Instead of looking at evolution as something inevitable, the industry has made it their business to refuse and/or sue change, by any necessary means.

In the case of The Pirate Bay, it’s been particularly obvious. My fellow co-founders — Fredrik Neij, Carl Lundström, Gottfrid Svartholm — and I were convicted in 2009 of contributory copyright infringement. Last week the Supreme Court of Sweden refused to hear our appeal. We each face between four months and one year in prison. My sentence was eight months.

Of course I would have preferred to win in the Supreme Court as personal vindication and to vacate my sentence. But beyond that, the Court has squandered a golden opportunity to define how to interpret the European Union directives for digital information. That decision not to decide has prompted many legal experts in Sweden to question the motives of denying the appeal. But the questionable decisions started long before that.

The Swedish prosecutor sent out a memo in 2006 saying that TPB wasn’t guilty of “main” crimes — at best it aids and abets (he also mentioned that the people running TPB were very clever). But Hollywood was not happy with this and forced the Swedish Minister of Justice to visit the White House and talk about it. The United States told Sweden that if they didn’t get rid of the site, they would not be allowed to trade with the U.S.!

The minister (illegally) told the prosecutor what had happened which forced him to raid TPB — only a few weeks after sending out that memo about how legal it was.

When we found out he’d been hired (by him changing his employer from “Polisen” to “Warner Bros” on Facebook) the reply we got was that it was proof that Swedish IT police are of such high caliber that even the big U.S. companies would hire them.

I got promoted from “witness” to “suspect” a week after the job was promised.

The problem here is that we’re allowing this dying industry to dictate the terms of our democracy. We allow them to dictate new laws (ACTA, SOPA, PIPA, IPRED, IPRED2, TPP, TRIPS, to name a few recent ones) that forbid evolution. If you don’t give up before you’re sued, they corrupt the legal system.

As I wrote immediately after the Supreme Court’s refusal to hear our appeal: “Today I urge everyone to make sure that the entertainment industry does not profit from them anymore. Stop seeing their movies. Stop listening to their music. Make sure that you find alternative ways to culture.

“Spread and participate in culture. Remix, reuse, use, abuse. Make sure no one controls your mind. Create new systems and technology that circumvent the corruption. Start a religion. Start your own nation, or buy one. Buy a bus. Crush it to pieces.”

The internet is being controlled by a corrupt industry. We need to stop it.

Peter Sunde is a co-founder and ex-spokesperson of The Pirate Bay, a BitTorrent search engine. He also founded Flattr, a micropayments system