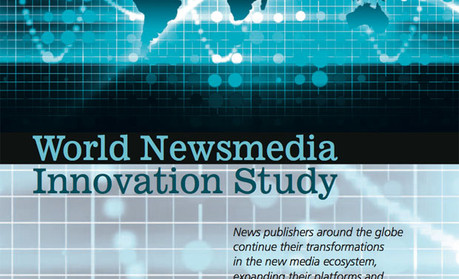 More than half of respondents to the World Newsmedia Innovation study placed social media top for investment in the coming five years.

Social media was ranked top for news media investment in the next five years by more than half of the respondents to the third annual World Newsmedia Innovation study.

According to the report for 2011, produced by the World Newsmedia Network in the US and the University of Central Lancashire in the UK, 57 per cent placed social media top of the list for where their companies will be investing over the next five years.

“Investments tie in with platform opportunities, with those answering the survey saying they view social media (138 of 242 respondents, or 57 percent) as an area offering opportunities for their organisations over the next five years.”

The second highest was paid-for products on tablets and e-readers, with 52 per cent, then paid-for “mobile phone services” with 47 per cent and conferences/events at 45 per cent.

The report, which uses the results of a survey from 244 respondents across 61 countries, also looked at the monetisation of different publishing platforms.

Websites were the platform found to be provided for free the most, with respondents saying that 78 per cent of their websites were free to access, compared to 6.9 per cent which are paid for. Another 12.9 per cent offer a part-paid for model, giving some content away for free.

62.8 per cent of mobile websites offered free access, with five per cent being paid for and 10.1 per cent “part free, part paid”.

Mobile phone apps remained also remained free in the majority of cases (45 per cent), while 13 per cent are paid-for, and another 13 per cent offer the part-paid for model.

On the other hand, the report found that tablet applications “have the highest percentage of paid models”, with 22 percent paid-for, 10.8 percent offering a partly-paid for model and 29 per cent being free.

The study also asked news media executives about their company’s revenues for the last fiscal year, citing “losses in print subscriptions and sales revenue and advertising revenue”, as the main causes for declines in revenue.

How to Use Google Analytics Audience Data to Improve Your Marketing

Do you need to learn more about the Audience reports in Google Analytics?   Do…