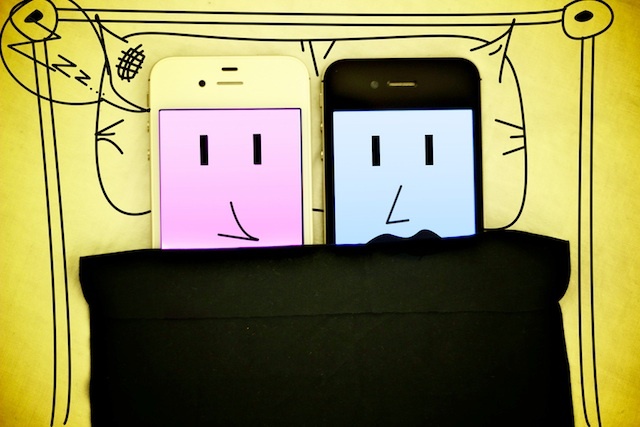 Smartphones & Tablets Will Outnumber Humans By The End Of The Year

The world is mad for smartphones. Everyone wants the latest and greatest smartphone that blows their mind with its ability to tell you where your friends are at, what they’re eating, their opinions on Rick Santorum’s sweatervests, and their favorite cat videos. But phones become outdated so quickly that we quickly toss out last year’s trend and pickup the next great mobile device more frequently than we change our car’s oil. It should come as no surprise, then, that pretty soon there will be more smartphones on the planet that humans. In fact, it will happen by the end of the year.
A recent mobile traffic analysis by Cisco this week revealed that by the end of 2012 internet-connected mobile devices will outnumber humans. By 2016 there will be an estimated 10 billion such devices. Mobile traffic alone in 2011 was greater than the entire internet traffic of 2000. Apple’s record breaking financial quarter shouldn’t have been such a shocker when we consider the world’s collective love for mobile computing.

Looking at my desk I have an iPhone 4S, iPhone 4, Galaxy Nexus and some Windows Phone whose name I can’t remember. It’s reckless people like me that are going to turn the planet into massive dump of dilapidated smartphones, and ya know what? I don’t even feel that guilty yet. It’s terrible I know, but the guilt of my cellphone habits are quickly washed away as soon as I see some cool picture on Instagram or read the latest news story on Flipboard (which is usually about a new cellphone that is coming out).

Cisco estimates that inorder to keep pace with the world’s growing thirst for mobile data, service providers will have to increase capacity 17 fold. What type of content is demanding all that data usage? It’s those damn cat videos! Cisco says that by 2016 video alone will account for a staggering 66% of the global mobile traffic demand. Just wait till Apple comes out with iPad 3-D, because those video files are sure to be bigger than the boring 2D ones you’re watching now.

The Global Data Forecast Update is an eye opening read for anyone interested in seeing the affect their cellphone usage has on the world and just where things might go. Did you know that despite having the largest population in the world, China only accounts for 5% of mobile traffic and that number is projected to increase to only 10% by 2016? I don’t know what kind of cool shit Chinese people check out on the internet, but once all 1 billion of them get their mits on an iPhone the internet servers of the world are sure to go on strike.