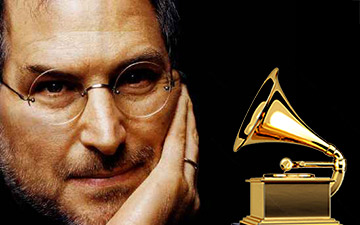 The National Academy of Recording Arts and Sciences will honor Steve Jobs with a Grammy Award, naming him a Trustees Award honoree on Wednesday.

This 2012 Special Merit Award will be presented posthumously at an invitation-only ceremony to be held on February 11, 2012, with a formal acknowledgment made during the 54th annual Grammy Awards television broadcast on Sunday, February 12, 2012.

According to a statement from the National Academy of Recording Arts and Sciences, Jobs will be honored for his long-standing career of innovation, helping to “create products and technology to transform the way we consume music, TV, movies, and books.”

Besides his role in the creation of the iPod, Steve Jobs was instrumental in convincing the major record companies to sell their music on the iTunes Store, which has sold more than 16 billion songs since its beginning on April 28, 2003.

An iPad-Optimized Ad Campaign Delivers An Amazing Return On Investment

Is Your Current PC Powerful Enough for Windows 8?

How to Use Google Analytics Custom Segments, Reports and Dashboards

Do you want more from Google Analytics than standard reports?   Did you know you can…